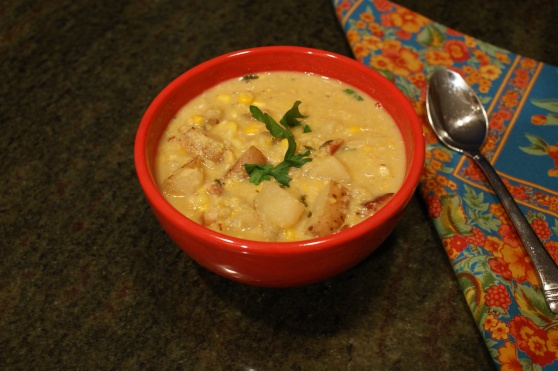 It’s the end of corn season and the start of soup season.  I grew up in Iowa but never had corn chowder until I moved to New England.  If you choose not to use bacon, a little fresh ground nutmeg added when cooking the corn makes a sweeter, lighter version of this soup.

In a large deep skillet, fry the bacon and drain on paper towels.  Pour off the excess fat and then sauté the leeks in the remaining fat, adding 1 tablespoon of the butter, if necessary.

Using a very sharp knife cut the kernels off of all the ears of corn (use the back of the knife to scrape the ears to get the most milk out of them) and add to the leeks, along with the butter and some salt and pepper.  Cook on medium heat until the corn is warmed through and then lower the heat.  Using a heatproof measure, remove 4 cups of the corn and puree it with ½ cup water in a food processor.  Move the corn and onion mixture from the skillet into a stock pot (I guess you could just start with that pot but I like the way my skillet browns the bacon and leeks) and add the corn puree, stock and potatoes.

Simmer on top of the stove until the potatoes are tender – if you make it early in the day you can keep it warm in a very low oven for several hours.  About an hour before serving, add the cream and parsley, correct the seasonings, and simmer until ready to serve.

Serves six as a main course with bread and salad – it’s a pretty big recipe and may be halved easily.

All content, including photographs unless otherwise credited, ©LettersHead 2019. Unauthorized use and/or duplication of this material without express and written permission from this blog’s author and/or owner is strictly prohibited. Excerpts and links may be used, provided that full and clear credit is given to LettersHead with appropriate and specific direction to the original content.